CSCI 5611: Animation and Planning in Games

3D OpenGL rendering of a bouncing ball. It uses OpenGL, GLEW, GLM, and a custom shader manager based off of a homework assignment for CSC5607 Fundamentals of Computer Graphics by taught by Dr. Victoria Interrante.

This check in includes multiple camera angles. Pressing B tracks the ball while aligning the camera and increasing the projection draw distance keeping the platform in view. Pressing R resets the view to an orbiting camera.

A fragment shader and vertex shader was used to calculate lighting.

Assignment one focused on building a particle system. I developed two demonstrations: a fire hydrant with water and a camp site with fire. 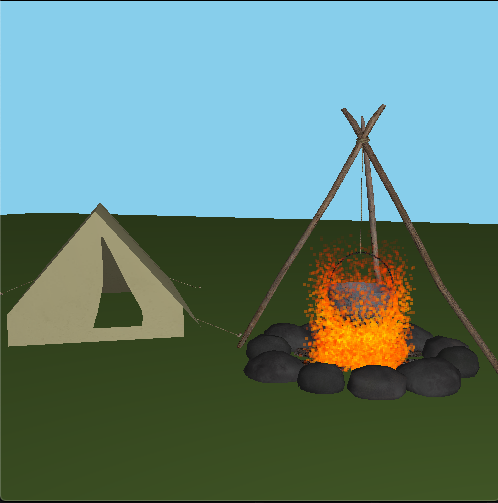 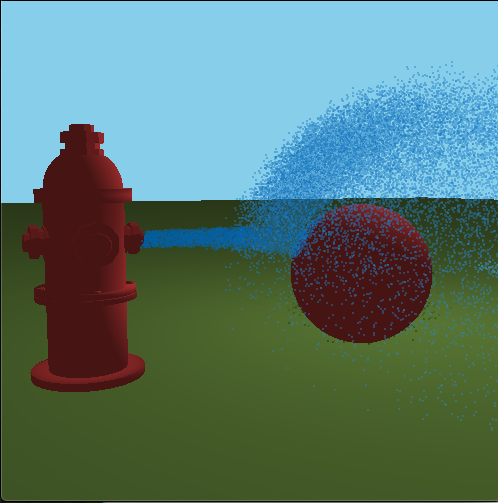 I developed the animation in OpenGL with two separate GLSL shaders (one for phong illumination, and the other for particle rendering). I used tinyobjloader to load the 3D models and stb_image to load the textures.

I attempted to use animated textures for the camp fire, but was unable to completely animate the textures by the due date. It did create a pretty interesting visuals though!

The biggest difficulties I encountered were concerning the multiple shaders, loading the OBJ files, and wrangling all the vertex buffer objects. I had extremely limited experience with OpenGL (just a few weeks near the end of CSCI 5607), so the entire process was a learning experience. This submission doesn't have the polish I would like it to have had, but I feel like I understand OpenGL significantly more after this assignment.

In this assignment we will be creating a cloth simulation. For assignment 2 check in, we were expected to create a vertical thread modeled after a system of springs.

In addition to the spring simulation, I also added a few additional features to my base simulation:

In this assignment we focused on physical simulations. I created a semi-advanced cloth as well as a 30x30x30 3D Eulerian Fluid simulation.

At any time during the simulation, press P to toggle between picking and flying around. When picking, the mouse ray casts to the cloth. The controls of the 3D Eulerian fluid is E to emit smoke. G for gravity. And the arrow keys for directional forces.

The code is split between three branches in github.

In this check-in, I have created a 0.5m radius game character is in a large 20m x 20m room. The character starts at the bottom left (-9,-9) and when the user presses N (for navigate, it navigates to the top right (9,9). There is a single obstacle in the room, represented by a sphere of radius 2 meters at coordinates (0,0). The user can also press M to navigate the character back to -9,-9 for a looping demo.

I am using a probabilistic roadmap (PRM) to plan a path for the agent from the start to the goal. It uses Dijkstra's algorithm for the path finding.

The code is in the #assignment3-checkin branch of my main opengl-animation repository.

In this assignment, we focused on building a motion planning framework used to animate groups of agents navigating in complex environments.

For my assignment, I implemented:

Other things, not necessary related to the assignment:

Press "I" to interact. Click to select an item (the bounding box will turn RED). Click and drag any obstacle. Rotate a selected obstacle with LEFT and RIGHT arrow keys. Click anywhere on the ground to direct a selected player entity.